YDLI…a once in a lifetime experience!

Two weeks ago, I had the great opportunity to join 50 other young dairy advocates from across the nation in Albuquerque, N.M., for the Young Dairy Leaders Institute. I first heard about this program from a friend who participated in Class 7 (I’m in class 8). All I can say is, Wow! What an opportunity!﻿﻿

﻿
A few of the Pennsylvania gals and I started the adventure a few days early with a trip to the Grand Canyon (more on that later!). YDLI officially started Wednesday February 6th with an optional tour of Old Town Albuquerque. This turned into a team-building and scavenger hunt adventure, as well as a great networking opportunity. I have such a fun class—and now 50 new friends!﻿﻿


Networking was the theme of the night as we learned various techniques and tricks for working a room. Another great opportunity to meet more people and learn about dairying in other parts of the nation and in Mexico and Canada. 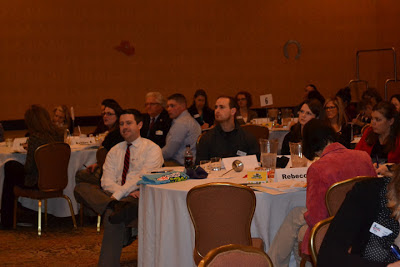 We learned about personality types and how we learn. Not surprisingly, most of the class learns by hands-on experiences. This is pretty typical in agriculture. We all took an online test beforehand that gave us the results for this. Mine says I was kinesthetic-visual-auditory. It also said I should work in agriculture. Check!
Media training was my favorite! Joan Horbiak, our media trainer, started the interviews a bit early with some surprise interviews at the end of day two. This was not my first encounter with media training or Joan, but I always learn something new. I like to talk, so I have to make a conscious effort to be short and to the point. As one of my former co-workers always says, you can never have too much media training. That is so true! I highly recommend media training to anyone who has the opportunity to go through it. It may be a little scary and uncomfortable at first, but it is so worth it in the end.

﻿
﻿
﻿
Later, we took the skills we learned onto the University of New Mexico campus for consumer interviews. We broke into groups of two or three and set out to see what some of our consumers think about the way dairy cows are treated, milk safety, local dairy products and more. The answers we got were very interesting. One of the guys we interviewed thought eggs were a dairy product. Another girl thought beef cows were dairy cows. All in all, there were a lot of trends. They didn’t know about the extensive processes we have in place on dairies to ensure milk is safe and free of antibiotic residue or about cow care. We left all of them with a card for DairyFarmingToday.org, a great resource for consumers to learn more about modern dairy farming.

We each have a ‘Phase II’ project to complete between now and the next time we meet as a class next February. Mine is focused on dairy image. I worked in dairy promotion for a while and absolutely love working with dairy image and helping others be effective dairy advocates. In the fall, I was asked to give a communications seminar focused on communicating the science at the National American Dairy Science Association meeting in July 2013. I am so excited! I have been involved in ADSA for a long time (and was the national president of the student division in college), so this is a dream come true to be asked to do this.﻿﻿﻿

﻿
I also have a couple other communications trainings coming up at the beginning of March and I’m trying to do a better job with keeping this blog updated and using it as a resource for others interested in advocating for the dairy industry. Or, what many people call ‘agvocating.’ There’s also several other things we have to do, including introducing ourselves to the media and legislators.

Again, I am so THRILLED to have this opportunity!! More updates on my Phase II project coming throughout the year. Stay tuned!

PS-Check out a few YDLI stories from my friends and classmates Kerry and Emily! YDLI also has a blog they update, too.
Posted by Kimmi | Kimmi's Dairyland at Tuesday, February 19, 2013