Giving back is the best way to show appreciation

Lately, a lot of people have asked me why I spend so much time working on projects that I don't get paid for.

The answer is very simple.

So many people helped me when I was younger and truly made such a difference in my life. I can't think of a better way to repay them than by helping others be successful.

When I ran for national president of the American Dairy Science Association-Student Affiliate Division the summer before my senior year in college, my campaign speech was that I was going to create a Western Region. At the time, there was a Northeast Region, Southern Region and Midwest Region, but a good half of the nation was region-less...and that "region-less" part of the country happened to be MY part of the country. I knew there had to be something we could do to fix this problem.

Long story short, the Western Region has already impacted more than 150 students in the first three years of its existence and is now self-sustaining! Huge accomplishment for those western advisors. So proud of them for all of their hard work and willingness to believe in the region for all it can do for our up and coming dairy students.

Last month, I had another awesome opportunity to participate on the CUDS (Cooperative University Dairy Students) Advisory Board at WSU to give the students valuable feedback they can use to make the group better and assist them in more efficiently managing their dairy herd.

I always love when students ask me for advice. There are so many things I wish people had told me in college, like don't freak out if you don't have a job the second you graduate and some things they did, such as to not be afraid to move for an internship (and do a lot of internships).

Someone also said, "Good things happen when people in the industry know who you are and what you can do." I didn't understand the true meaning of this when he said it junior year, but I do now and I couldn't agree more. Get involved. Take a chance. If it doesn't work out, it's not the end of the world but at least you tried. Not everything is going to work, but take a chance. More often than not, you will be glad you did.

I was extremely surprised when the WSU dairy club president texted me in September to ask if I was planning to attend the WSU Dairy Banquet the next month. Since I live on the east coast, that was not in the plans unfortunately. So, even though the club generally keeps it a secret until the night of the banquet, she said, "Well, you've been selected as alumni of the year, so we wanted to make sure you are invited." OH MY GOSH!!!!! I presented the award as the dairy club president my senior year but never in a million years thought I would be receiving that award. As I said that night, it's such an honor and I'm just so happy to see the students continuing to be involved in the same great dairy programs that gave me a solid start to my career. Again, thank you, thank you, THANK YOU!!! 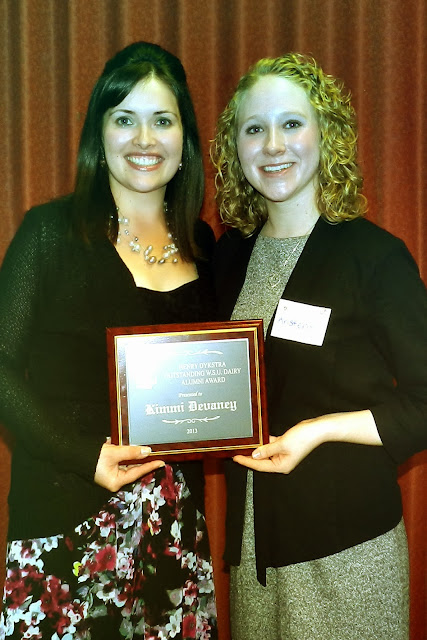 So, long blog post short, volunteering time for organizations that truly made a difference is the best way to give back and say thank you while mentoring and helping the next generation, even if the "next generation" is just a few years younger than you.

What advice would you give to university dairy students?
Posted by Kimmi | Kimmi's Dairyland at Wednesday, November 20, 2013