Dairy FAQ: What are those marshmallows in the field?

Marshmallows. They are awesome in hot chocolate, but what are they doing in your neighbor's field? If you've ever wondered what those large marshmallow-like things are, you've come to the right place.

We do a lot of hay in the summertime. For more about that process, check out this post from last summer.

There are different shapes and sizes hay (essentially dried grass) can be baled into. We do mostly small square bales since they are easy to handle and also more marketable to people in our area that buy hay from my brother. While these are called small squares, they are really rectangles. Squares if you look from the small end of the bale.

Then there are large square bales. The dairy I worked on in college had these. It saves a lot of time in carrying lots of the small square bales over to the cows. Size of bale mainly depends on what the farmer is planning to use it for. If they are selling it, they need to think about what their customers want.

Now on to the round bales. These are rather large. As in taller than me. Sometimes they are left unwrapped, sometimes they are covered with a net-like wrap and sometimes they are wrapped in plastic. I first saw the net wrap (I doubt that's actually the name of it) when I lived in North Carolina. Someone explained that while it didn't cover the entire bale, it was effective since moisture would attract to the netting and away from the hay. 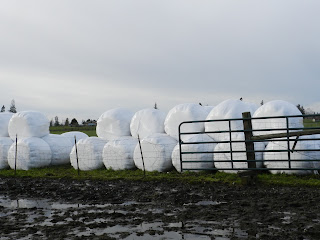 The white plastic covering the round bale protects the hay from the elements, such as rain and snow, that can cause it to mold. Feeding moldy hay to livestock is bad and should be avoided. We store our hay in the barn and rarely leave anything outside. This year, we have a few of those marshmallows in our field. Some farmers cover hay with tarps to protect it from the elements if it's outside. Take home message: hay needs to stay dry and there are lots of ways to make that happen.

To go off on a quick tangent, silage is sometimes stored in long tubes of that white plastic, called ag bags. Silage is chopped at a higher moisture level and ferments, creating high-quality feed for cattle. Hay should not ferment. For more about silage, click here. 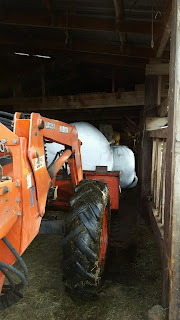 Pushing the round bales into the manger where the cows eat

Okay, now back to the marshmallows. Now that you know what they are, let's talk about why they are important. Our cows graze our pastures in the summer and sometimes in the spring and fall depending on the weather. As warm as Washington winters are, the grass isn't growing much. Cows don't go on a diet in the winter, so what should they do? This is when they eat a lot more of the hay we made in the warm summer months.

On a dairy where cows eat a total mixed ration (the casserole of ingredients), hay is generally an ingredient and is fed year round.

Speaking of marshmallows, I'm going to make myself some hot chocolate (made with milk, not water) and add some of the colorful mini marshmallows.