Looking for a new breakfast favorite? Look no further. Try my Cascade Scramble! 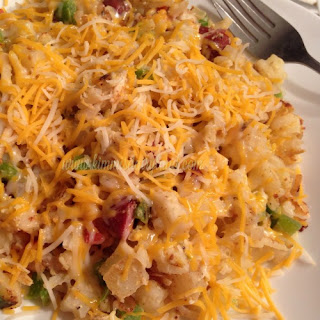 This delicious recipe was inspired by one of my favorite breakfast staples at my favorite hometown breakfast/lunch spot. Since I don't live there anymore (or within driving distance), I always stop in for their meat lovers scramble atleast once every time I go home. It's always so amazing! The only thing missing is more veggies. As the name suggests, it's light on the veggies, heavy on the meat. So, my version, the Cascade Scramble, has more veggies and still a good serving of meat. Best of both worlds! Since we grew up in the foothills of the Cascade Mountains, there couldn't be a more perfect recipe name for this new favorite.

Since it's a town with a bunch of dairy farms, it's only fitting that you cover it with cheese. I usually use a lot more than in the photos below. Otherwise, all you would see is cheese! Yum!

My favorite part of moving around and living in several states has been getting to see how different agriculture is in each part of the county. People often ask me how different Indiana is than where I grew up. I can assure you, it's QUITE different! Indiana lacks mountains and it's taken a while to get used to being able to see half way across the state. One thing is the same though. And that's the care and dedication farmers have for their animals and the land.

Regardless of whether a farmer is growing corn for corn silage (food for cows!) in western Washington or growing soybeans in the heartland of Indiana, taking good care of the soil is essential if they want to have successful crops in the future. You wouldn't expect to perform well in anything if you ate junk, were crowded all of the time and literally were allowed to run down hill. This is why farmers make sure their soil is in good shape and that weeds don't crowd their crops. They also take precautions to avoid run off. Using cover crops helps prevent soil erosion, conserves soil moisture and protects water quality. Think about it. It's harder for the soil to wash away if a plant has roots in it holding it down. 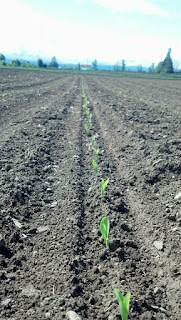 Corn emerging from the ground. This was last year...it's still a little too cold to
start planting in most areas.

Farmers take regular soil samples to ensure the soil is in good health. Did you know that the soil can be different in different parts of a field? Yes, a field. To fully manage soil health, you must know where you are and where you've been and be able to measure it. Now you see why soil samples are important. It's like a report card for the dirt. Dirt is very important.

Speaking of dirt, I know plenty of farmers that are excited to start playing in the dirt! By that, I mean planting. They don't actually plant crops by hand. That would take a LONG time to plant hundreds of acres. They use a planter that will plant several rows at a time. 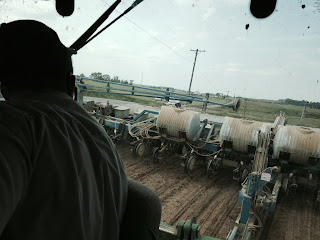 That's the planter behind the tractor

To learn more about planting crops on the farm, check out this post I wrote last spring. I spent the day riding along with a friend I consider my adopted brother and learned a ton while he was planting. I'd like to think I was helping, but really I was just riding along and asking a lot of questions.

Whether you are about to spend the day in the field planting or at the office, fuel up with this delicious Cascade Scramble!