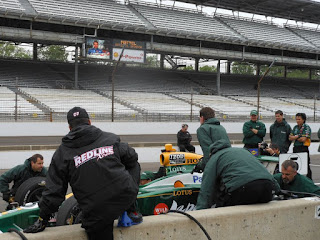 Growing up in Washington State, the Indy 500 wasn't really a big deal. It wasn't until I moved to Indiana five years ago to work for the dairy association that I discovered how big a deal it really is. And it's an even bigger deal for the dairy industry. In fact, I was at the track today and there were cows. No, I wasn't imagining it. 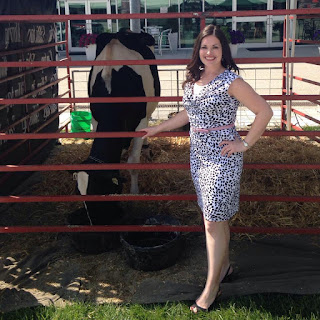 This picture is actually from last year's event, but see, cows! At the track!

Let's take a step back here. Why are there cows affiliated with the Indy 500? We can thank Louis Meyer for that. This Indy 500 legend won his first 500 in 1928 and upon winning his second in 1933, asked for buttermilk after the race. Fast forward to his third win in 1936 when he again wanted buttermilk and was this time photographed drinking this great beverage. This spurred the Milk Foundation to present milk to race winners on and off for the next two decades until Hulman made the Bottle of Milk a permanent Victory Lane tradition. Today, it's sponsored by the American Dairy Association Indiana, the association representing Indiana's 1200 dairy families, and dairy farmers present the milk to the winner.

My non-ag friends laugh. Milk? Seriously? Can't they drink something else? Well, Emerson Fittipaldi tried that in 1993 when he asked for orange juice. This was not okay with race fans. Yikes. I would not have wanted to be him. Again, you can't go wrong with nature's perfect food--milk!

I've had the good fortune to get to know many of the dairy farmers on the dairy association board and it's so exciting seeing them check this major privilege off their bucket list. 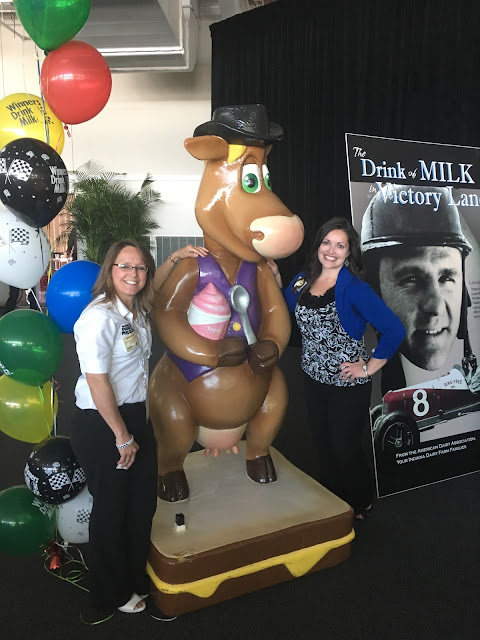 2016 is the 100th running of the race and it's a woman that will meet the winning driver in Victory Circle with the milk. How awesome is that!? Not only that, but she is fantastic. Her family does a great job on their dairy farm. I visited them while working for the dairy association and they are great. Great is a good word to describe most of the dairy families I've met in my life. They remind me much of my own family and the industry is a close-knit community.

To make this year's race even more amazing, Prairie Farms is donating 100,000 milks so that race attendees can toast the end of the race with the driver.

Even if you can't make it to the race, you can still pour yourself an ice cold glass of milk on race day and toast to these talented drivers and also to the lovely folks meeting them at the end of the race. Dairy farmers are the hardest working people I've ever met. It's not an easy life and it builds character. I'll be toasting this amazing industry in addition to the drivers.

Email ThisBlogThis!Share to TwitterShare to FacebookShare to Pinterest
Labels: Indy 500