A lot has changed on dairy farms since my Grandpa was milking cows by hand before and after school in the 1920s with his dad.

These days, most dairies have a milk pipeline that carries the milk from the milking machines (where it leaves the cow) to the refrigerated bulk tank. Milk is never touched by human hands. It used to be more work, though. When my grandparents dairied in town before moving to our current location in the mid 1950s, they sold milk in cans to the local creamery. Since there were so many dairies, the milk cans each had numbers representing the dairy farm it came from. 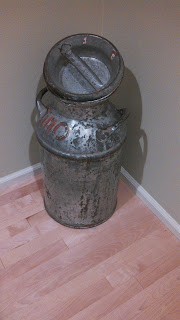 These were the cans milk was sold in a long time ago.


Today, not many dairies milk in a flat barn parlor like we used to. A flat barn parlor requires the person milking the cows to bend down to put the milking machine on the cows. This is a very good way to get kicked. Just ask Grandpa. Most dairies now have milking parlors where the people milking the cows stand in the pit, which is below the area where the cows stand. This means the cows udders are at the proper level to apply the milking machines while standing up. Many also have monitors that measure the amount of milk each cow produced and the deviation from their average production. 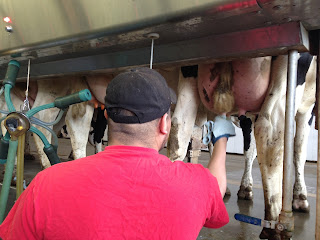 Cows' udders are at eye level, which makes it much easier to milk them. 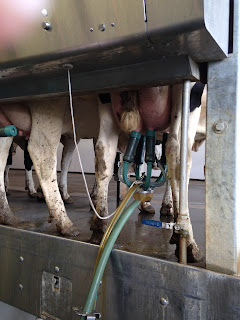 This is what it looks like when milking machines are attached to the cow. They are generally attached for less than 10 minutes at a time. 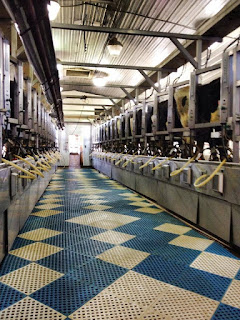 This is one example of a modern milking parlor. There are lots of different types, but most dairies have a pit where the milkers stand, which is below where the cows are.

Since moving to our current location, we haven't used cans, but didn't use a pipeline in the '50s either. the milking machines themselves looked pretty similar to those used today, except they were attached to these small cans (see below) and then into larger buckets, which were dumped into our flat-top bulk tank. Farming has always been a good workout. 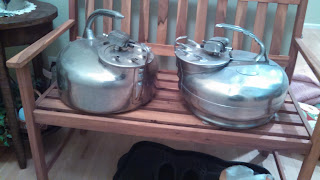 These were the milking machines we used in the '50s, '60s and '70s. They are great as repurposed flower pots these days. 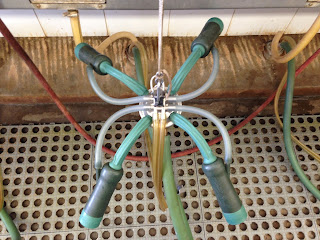 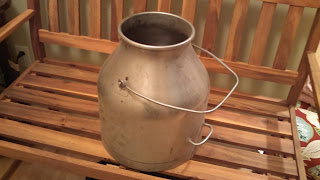 After the cow was done being milked, milk was poured from the can attached to the machine into this pail, which was then dumped into the bulk tank.

Milk was poured into a strainer (see below) placed in the opening of the tank and strained through a coffee-filter type material before it went into the bulk tank. Today, we still use filters, but not in the same location. They are located inside the pipeline. It helps to ensure that nothing besides the milk ends up in the bulk tank. 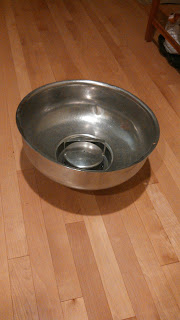 This is the strainer that the filter was placed in. This was in the opening of the bulk tank where milk was stored and milk was poured from the pails into this strainer.

Milk was picked up every two days, similar to today's standards. Did you know that each state has regulations on how often milk must be picked up? In Indiana it's 48 hours. Most states are very similar to this. Milk is a perishable food, so we want to make sure it's as fresh as possible when it reaches the end consumer.


Similar to today, inspectors would show up unannounced and score the farm on various sanitation standards. Everything needs to be clean and in good working order. Rubber parts need to be changed regularly. Stuff like that. Not passing an inspection or two can lead to problems, such as suspension of the permit to ship milk. This is not good, so every dairy farmer takes these inspections seriously. It's good to treat each day like the inspector may show up, so when they do it's not a big deal since everything is on point.

Also similar to today, the milk truck driver took a sample and recorded the temperature of the milk before milk was pumped onto the truck. Most farms had around 50 cows. Today, averages vary by state and range from about 500 in Washington to 150 in Indiana to 2,000 in New Mexico. All sizes of dairies can do a great job; taking good care of the animals has nothing to do with size. 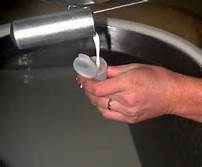 This is how milk truck drivers take a sample of milk. The milk is placed on ice to keep it cold since usually there are a few stops to pick up more milk before going to the milk plant. This sample is tested at the plant for antibiotics and also tested at the lab for several other milk quality tests.

Milk quality standards sure have changed, though. Granny would always tell me stories about cleaning the milk tank. Not cleaning it properly can lead to high bacteria counts. Bacteria loves milk, but by keeping things clean and keeping the milk cold at the proper temperature, we can significantly reduce bacteria growth. This is also something that is measured and tested at the lab. Farmers receive a penalty in price (a deduction) if the bacteria level is over a certain threshold. The legal limit on somatic cell counts, a measure of white blood cells that indicate how healthy the cow is, has dropped significantly over the year. Right now, it's 750,000, but most dairies are under 300,000. A high SCC indicates mastitis, an inflammation of the mammary gland. There are also penalties for having this count too high. However, it is not allowed to be over the legal limit.

Dairy farmers are doing a better job than ever today with milk quality. They have many tools to help them test for mastitis and other things, plate coolers to help cool the milk, a lot of monitors in the milking parlor and elsewhere to track how things are going, and more.

A lot of people ask me if milk is less safe today because we use so much more technology. It's MUCH safer today. The way we milk cows has changed and we are held to stiffer required standards, but every dairy farmer I know is in this business because they love their cows and this way of life. We also care about producing a quality nutritious product for consumers.

For more about how our farm has changed in the last 100 years, check out this post.
Posted by Kimmi | Kimmi's Dairyland at Friday, November 11, 2016