Our crops use technology too!

I've previously shared information about how our farm has changed over the years. (In case you missed it check out this post or this one). Technology has played a big part in that transformation. It helps us be more efficient, be better environmental stewards and saves a lot of time, among other things.

I generally talk about technology as it relates to the cows and equipment, so let's switch it up and focus on the crops. Crops are important on a farm. A lot of livestock farms will grow atleast some of their feed, which cuts down on costs. On a dairy, feed accounts for about 50% of total production costs.


As with any business, there's a lot of planning. However, in farming, there is no way to plan for what Mother Nature may have in store that growing season. There may be a drought. There may be floods. There are insects and other pests that can eat away at and potentially destroy a crop. As much as we try, we can't control it. Crop technology, however, helps us deal with this.

Similar to how livestock have been bred over the years for particular traits that make them more efficient, plant breeding also helps with this. By taking a trait that you want--say, drought resistance--and inserting it into another crop that isn't drought resistant, you create a very good thing. A hardier plant that stands up to drought and needs less water. In a drought year, this would perform much better than a plant without that drought-resistant trait, which helps with supply. Supply and demand affects prices.

Have you ever been at a party where a bunch of people who weren't invited showed up, took up all the space and ate all the food? Yes? I'd imagine you wouldn't be too happy about that. That's similar to the affect weeds have on crops in a field. They are not only annoying, they also use nutrients from the soil that should be used by the crops.


Seed technology has helped with developing weed-resistant and pest-resistant crop varieties. This reduces the amount of pesticides that need to be applied to these fields. By reducing pests, this also reduces the damage these critters cause to the crop. The pest-resistant variety contains a soil bacterium that is toxic to certain types of insects that feed on the plants. If you've heard 'bt' mentioned before in relation to GMOs, it stands for Bacillus thuringiensis and is the bacterium I'm referring to. 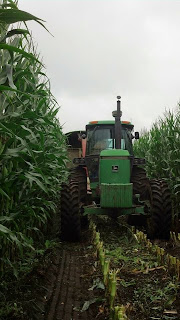 So, let's review. This seed/crop technology can produce plants that can survive and thrive with less water during a drought and that is resistant to weeds and pests that try to take over their space and use up their nutrients that they need to grow properly. This is good!

My friend Marybeth from My Fearless Kitchen described it very well when she said, "One point to make is that when you eat a carrot, you do not become part carrot. Or when you eat chicken, you do not become part chicken. It's the same thing with any food, genetically modified or not. When cows eat genetically modified corn, their bodies can't tell any difference from "regular" corn. They don't absorb the DNA, they don't become part corn, and nothing about the cow is changed."

The technical term for this is biotechnology...technology for living things. These varieties I've been talking about are genetically modified organisms or GMOs. Wait, aren't GMOs bad? Don't they harm people and the environment? Quite the opposite. They help farmers be better environmental stewards. As far as hurting people, they don't. Many, many studies have looked at this and still haven't found anything. GMOs have been around for a long time. Genetically modified tomatoes hit the market in the 90s and now there are up to 10 genetically modified (GM) crops approved by the FDA. 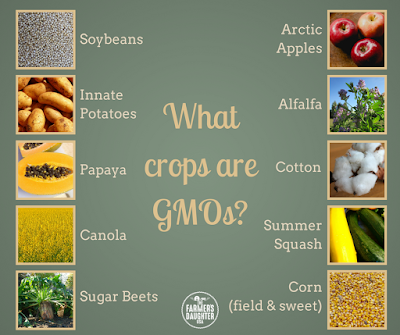 My brother plants GM corn for the herbicide tolerance, disease resistance and increased tonnage and feed value/quality. Technology doesn't replace hard work or planning, but it does help farmers better manage things they don't always have control over, such as weeds and weather.
Posted by Kimmi | Kimmi's Dairyland at Tuesday, January 31, 2017