Growing up, summer meant hay season and show season. When we were little, Grandpa would always take us with him on the tractor when he was raking hay. It was great quality time with him and as we got older, we took on added responsibilities on the farm such as driving tractor, loading hay and helping with whatever needed to be done. My brother is a crop farmer and tells you all about hay season in our corner of the world below.

What months are considered “hay season”? 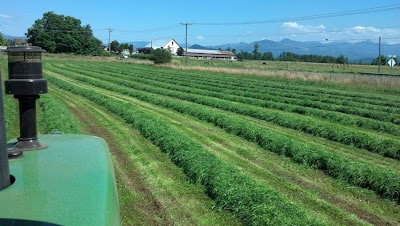 How many cuttings do you typically get per year?

Right now, we are on our 4th cutting for this summer. We are expecting to cut the next cutting around the third week of August.

What do you want the general public to know about hay farming?

Farmers work hard to take care of their animals and making hay ensures we have enough nutritious feed for our cows year round.  Along with farming comes an increase in farm equipment on the roads. Farmers do their best to stay out of your way, but if you come across a tractor on the road, please slow down and be cautious. Also, as my sister always says, if you have questions about farming, please ask!

Email ThisBlogThis!Share to TwitterShare to FacebookShare to Pinterest
Labels: hay