Similarities between Dollywood and Dairy Farms

One of my dairy friends from home was in town this weekend so we took a trip to Tennessee for work and stopped at Dollywood on the way back. 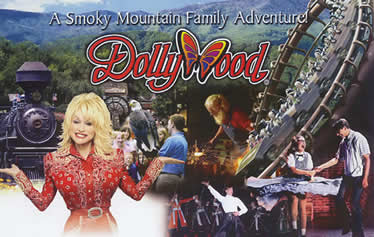 It's been a while since I've been to an amusement park, but I couldn't help but notice the similarities between the park and dairy farms. 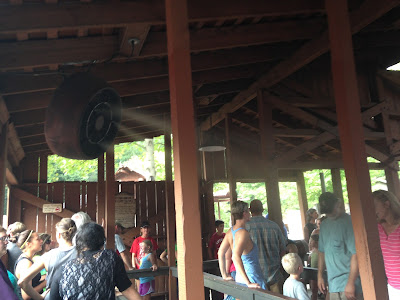 This was one of the first things I noticed that inspired me to write this blog post. We were waiting in line for one of the water rides and there were a few misting fans cooling the people in the line. This picture is similar to dairies in two ways. First, the misting fans in this picture are similar to fans and misters used on farms. True, many fans and misters are separate devices, but they do the same thing to cool cows in the barn and holding pen while cows are waiting their turn to be milked. Speaking of holding pens, the lines for the rides reminded me of that. People don't like being hot in a confined space and neither do cows. Cow comfort is a big deal on dairy farms and dairy farmers do many things to keep their cows cool, including using fans and misters to increase air flow and evaporative cooling. 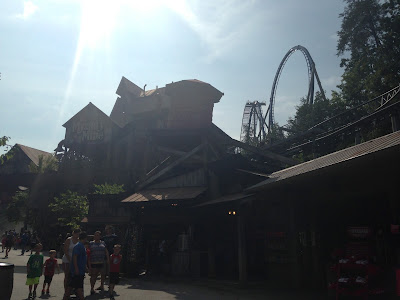 Since we are making comparisons, the amusement park itself would be the farm and the people would be the cows. I say that because on dairy farms, cows are free to roam around the barn and/or pasture depending on the set up of the farm. Although people are free to leave the park whenever they'd like, we don't want cows to run away so that is one difference. People can eat whenever they want, rest whenever they want and go on rides. Cows can do the same on the farm. Well, besides going on rides. 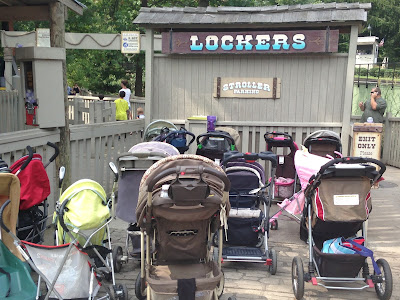 There were a lot of strollers around the park, but people obviously could not take them on the rides. We found this stroller parking area and it reminded us of calf hutches where baby calves live for the first few months of their lives. Strollers are mobile, so perhaps mobile calf hutch is a better term to use. All the calf hutches I've ever seen are not mobile, but not every comparison is perfect.

The workers at the park would be the herds manager, employees and dairy farmers. They make sure everything gets done and things are running smoothly. 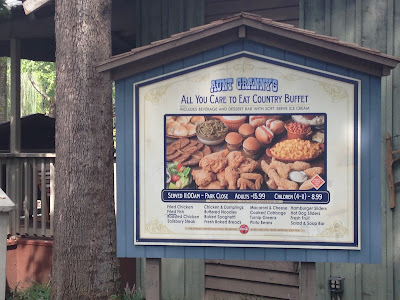 At some point in the day, most people at Dollywood found a place to eat. There was one sign for a buffet, which reminded me of cows going to the barn to eat their total mixed ration (TMR), which is like a buffet of different feeds mixed together. Many dairies hire animal nutritionists to balance the ration to meet the cows' nutritional needs. In fact, cows see a nutritionist more often than most people see a dietitian. 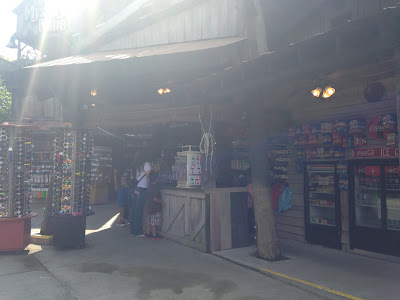 There are many companies in the dairy industry and agriculture that sell products to dairy farms. Many have reps that come directly to the farm. They don't usually set up shop on the farm, but rather serve as a consultant for the dairy farmer. The various shops at Dollywood represent these many vendors and experts dairy farmers work with to keep their farm operating well and their cows healthy.

Country music was playing throughout the park, just as it does throughout many barns and milking parlors. 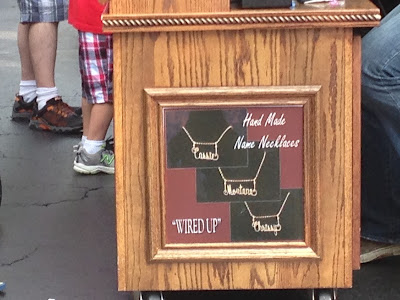 Many cows--especially those that are registered--have an ear tag in their ear or some kind of identification. This, coupled with record keeping, allows dairy farmers to keep track of the cows and also track their health histories, life events and many other things, such as milk production. They didn't sell ear tags at the park, but they did have many stands selling necklaces and rings with names on them. Many dairy cows do have names. Those that are registered have three names. One of my show cows many years ago was named Roselyn Super Lux Jodie. Roselyn was the farm name, Super Lux was the sire (dad), and Jodie was the cow's name. 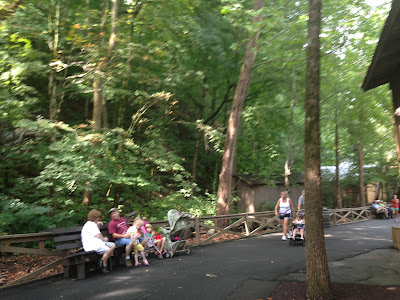 Summers are hot in the Southeast, so many people (including us) loved that there were many trees providing shade. Many farmers that keep their cows out on pasture have trees or some type of structure to provide shade.

Every conversation and every day is an opportunity to help bridge the gap between the dairy industry and the general public. We have a great story to tell in agriculture and we need to take advantage of these everyday opportunities to share it.
Posted by Kimmi | Kimmi's Dairyland at Tuesday, September 03, 2013