A visit to the only tea farm in America, the Charleston Tea Plantation

Did you know that South Carolina is home to the only tea plantation/farm in North America? Neither did I until I visited the 127-acre Charleston Tea Plantation on historic Wadmalaw Island near Charleston this weekend. To say I learned a lot about tea farming and production is an understatement. For example, did you know that some of the tea plants on the plantation are approximately 600 years old and still producing tea? Wow! 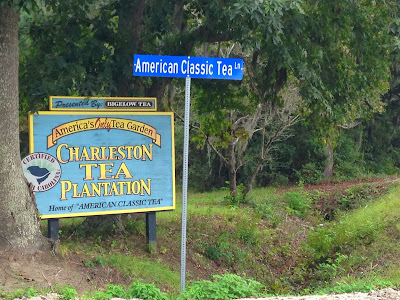 Every good tour guide is unofficially required to have some good trivia on hand and indeed he did. (scroll to the very bottom of this blog post for answers)

Tea grows in 34 countries across the globe, and the low country near Charleston is perfect for growing tea. The tea bush is an evergreen plant that is dormant in the winter and loves hot, humid weather. Growers are able to get 7-10 cuttings from the same bush throughout the year and new growth appears in 17-21 days. Seedlings are clones of existing mature plants. 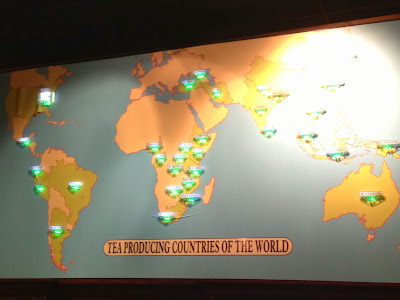 The greenhouse is home to the seedlings for their first six months and then they are moved to the field for hardening. Root production and growth is the focus during this time and temperature control is key. A computer regulates both air and root temperature by controlling the water tubes for roots, air temperature and curtains. Root temperature is set at 75 degrees Fahrenheit and air temperature at 85 degrees Fahrenheit. Plants are also misted every 20 minutes for 20 seconds at a time. Right now, there are about 6,000 seedlings incubating in the greenhouse with capacity for 15,000.

Once the tea is planted, the soil is not tilled again. Tea plants need approximately one inch of rain per week, which is perfect since the region receives approximately 52 inches of rainfall annually.  Harvest season lasts from April/May until September/October, and similar to rotational grazing where cows move to a different paddock (area of grass) every day, the tea is harvested in a similar manner. There are 20 or 21 fields or areas and each day another is harvested in a rotational fashion.


The harvester clips the top off the tea plants and blows tea leaves into the hopper. It takes half of a day to cut 5,000 pounds of tea. Tea harvesting would be labor intensive without a machine. With the mechanical harvester, one person drives the harvester, one person is in the factory and two people go through the sections with machetes to cut vines off before the harvester comes through. If tea leaves were cut by hand it would take more than 700 people. This is just another example of how technology helps farmers of all types be more efficient and do more with less. I mean, where would you find 700 people that actually want to spend all day for many weeks or months cutting tea leaves?

The Charleston Tea Plantation grows eight different varieties of tea that are grown together, not in separate areas. Our tour guide explained that if one or two varieties don’t do as well one year due to weather or other conditions, they still have a tea crop since they have multiple varieties.

Although they grow several varieties, the guide said that tea taste is influenced more by soil, humidity and other environmental factors than by the specific variety of tea.

So, if environmental factors such as soil and humidity affect the taste of tea more than the specific variety does, how do we end up with green tea, black tea and other varieties?  The tea leaf is approximately 20 percent solids/dry matter and 80 percent moisture and made up of millions of cells. These cells must rupture to make tea. In the factory, the liquid in these cells is exposed to moisture, and it is the time of exposure that determines if it is green tea or black tea. Black tea takes 50 minutes in the oxidation bed, Oolong tea (a type of Chinese tea) takes 15 minutes and green tea requires no time on the withering or oxidation beds and is steamed immediately. To stop the oxidation process, leaves are placed in an enclosed dryer for 25 minutes to seal in flavor. Afterwards, flavor is only released when immersed in boiling water. Five pounds of tea from the field equates to one pound of finished tea.

The plantation supplies tea to all Whole Foods in North Carolina, South Carolina, Virginia and Georgia. They have plans to soon supply tea to the grocery chain in Maryland and Pennsylvania.

Email ThisBlogThis!Share to TwitterShare to FacebookShare to Pinterest
Labels: travel