Dairy FAQ: How do I know if my milk is local? 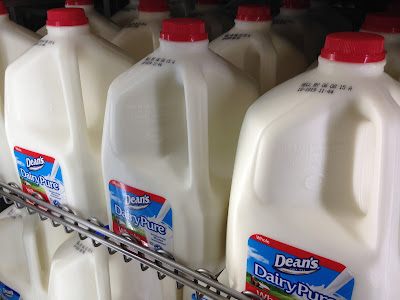 The local foods movement has gained momentum in recent years. One thing I love about agriculture is that there seems to be a niche market for everyone - farmers and consumers.


When you go to the grocery store, you likely won't see individual farm names on milk jugs. Instead of seeing labels such as Johnson Dairy (our retired dairy farm name), you'll see Dean's, Prairie Farms, various store brands. If you're in Washington, you'll see a lot of Darigold milk since that's the main milk marketing cooperative out there.

Since you can't find your neighbor's dairy name on the shelves, how can you know it's local? On each gallon of milk, there's a code. It may say 18-1019. 18 is the state code, which happens to be Indiana, and 1019 is the plant code where it was processed. By processed, I mean where it was pasteurized and homogenized.


Below are all the state codes:

Most milk doesn't travel very far. Everyone has their own definition of local, but for milk, being processed in the same state is pretty local. Some milk will travel outside of state lines for processing. For example, some farms in west central Indiana ship milk to the Dannon plant in Ohio to be made into yogurt. Some Indiana milk will travel into the Southeast to help fill their deficit during various times of the year. The Southeast does not produce enough milk to satisfy the demand, so they usually bring it in from New Mexico, Texas, the Mideast region (Indiana, Ohio, etc.) and Pennsylvania. When I was a field rep in North Carolina and Virginia, many of the milk plants I worked with (it was mostly a fluid market, meaning most plants processed fluid milk instead of cheese or other dairy products) brought in milk from those other regions during the late summer months.


Cows tend to produce more milk in the spring (March/April) during what we call the "spring flush" and less during the hot part of the summer (August/September). August and September is also when schools start back up, so there's added demand. If none of that makes sense and you want to learn more about that, let me know.

By purchasing milk with your state's code on it, you're supporting your home-state dairy farmers. Keep in mind that some milk crosses state lines for processing, so buying milk from other states is good too.