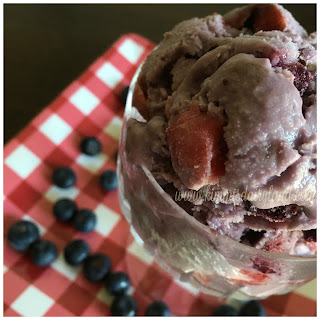 Nothing really says summer like ice cream, hay season and cow shows. Weather in western Washington is such that we usually get our first cutting of hay by 4th of July. School was out around June 23rd or so every year, so it was just about time for Grandpa to start cutting hay. There's nothing I love more than the smell of fresh cut grass/hay. As a kid, it was 10 weeks of no school, lots of time at the farm with the show cows, fun times showing our cows at the county fair at the end of July and of course, putting in hay.


One of the awesome things about using the larger cab tractors instead of the smaller open cab tractors is that there is a buddy seat and I can ride along. Step one: cut the hay using a mower and not the kind you use for your yard. It's a lot bigger and ours has a tendency to kick up rocks and send them right through the tractor cab windows. We now use a rock guard to protect the windows. Next up, tedding. Tedding kicks up the hay after you cut it to help it dry. After tedding, it's raked into windrows and then baled. Then comes the fun job of picking all the bales up and taking them to the barn. 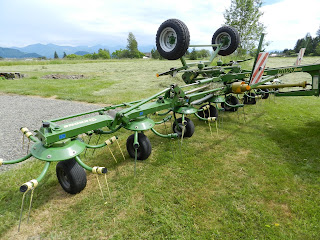 This is the tedder. It kicks up the hay to help dry it out. The rake is what puts the hay into windrows.

I've talked about how we all (including farm folks) need to watch out for equipment on the roads during planting and harvest seasons in the spring and fall, but hay season also brings farm equipment onto the roads. Sometimes, you just can't avoid a main highway. 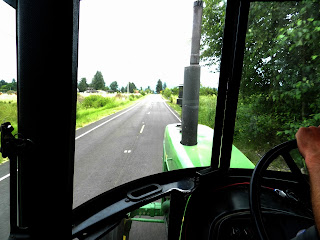 I talk about hay season, but what exactly goes into making hay? My brother was nice enough to do a guest post for me a few years ago, so here's what he has to say about one of our favorite times of year:

What months are considered “hay season”? 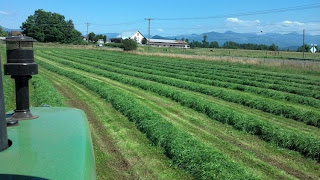 How many cuttings do you typically get per year?

Now that we've talked all about how we make hay on our farm, let's eat some ice cream!

Makes about about 1/2 gallon